The speedless flow of data

Fig 1 shows the writer standing between a pair of mirrors mounted on the north and south walls of a small room. In both mirrors I see a chain of continually changing images of the room. I know they are continually changing because if I move the images of me in the room move too. Individual images are inert but they are continually streaming away from the room to north and south to allow new images to take their place. The images are therefore a record of the room’s past and the third image is deeper in the past than the second which is deeper in the past than the first.

Fig 1: The writer observing the speedless flow of scientific data.

In fig 1, the images alternate between forward and backward views of the room because they are alternately seen in the northern and southern mirrors, but initially I will ignore that detail to focus on the location of the images relative t# the room, as shown in fig 2. 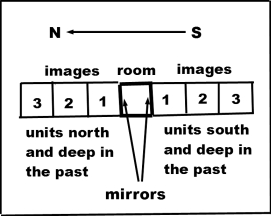 Images of the past are inert so a given image flows continually to deeper past to maintain constant differential depths of images 1, 2, 3, relative to the continually aging objects in the room.

There are no concepts of time, distance, speed and speed of light because time and distance have both been replaced by depth in the past. The flow of images to deeper past is therefore speedless.

The concepts of time and distance import into science an unnecessary and unreal fourth dimension. That is illustrated in figs 3 and 4.

Fig 3: How the one-dimensional speedless flow of data can be converted reversibly to two dimensions and then irreversibly to speeded flow by adding concepts

In fig 3(a), the alternating views of the images in fig  1 are represented by N and S arrows and additional broken arrows are added to provide a continuous route along which the speedless flow of the images can occur.

The conversion of fig 3(a) from one dimension to two can be reversed by turning the directions of the broken arrows back to being parallel or anti-parallel with the N and S arrows, but it can not be reversed if the above identifications have been made and the capitalised concepts introduced. Then one is trapped in an unreal four dimensional representation of the real three dimensional world.

The use of the ideas of time, distance, speed, light waves and the speed of light waves causes scientists to describe a completely unreal world with four dimensions instead of three.

That’s all. Thank you for joining me.